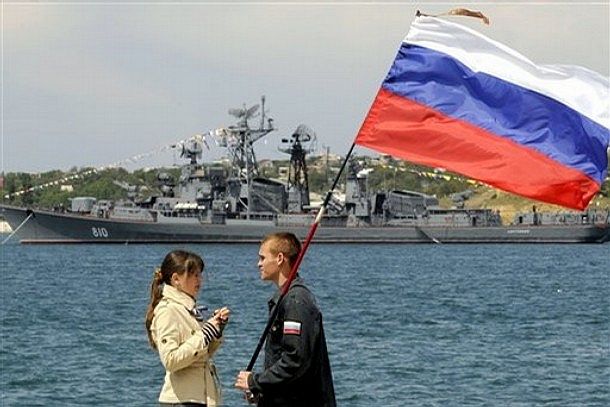 A man holding a Russian flag speaks with a girl wearing a telnyashka, a traditional navy sailor’s striped vest, under her jacket during a naval parade to mark the 225th anniversary of Russian navy’s Black Sea fleet at the Crimean Peninsula port of Sevastopol, Ukraine, Sunday, May 11, 2008, with the Russian Smetlivy destroyer in the background. Sevastopol is still home to the Russian Black Sea Fleet more than 15 years after the Soviet collapse. Under the agreement between Russia and Ukraine, the Russian navy was allowed to remain in Sevastopol until 2017, paying an annual rent of US$93 million (euro73 million). (AP Photo/Sergei Chuzavkov)